Stephen Curry, Kobe Bryant, and Lebron James. These are the names I hear over and over again when I ask the 5th graders that I coach at Rainier Beach Community Center who their favorite basketball players are. When I say, “What about Sue Bird? Maya Moore? Breanna Stewart? Candace Parker?”, I always receive blank stares. These girls have grown up around some of the best basketball in the country without even knowing it. When I told one of my players that the Seattle Storm had won their 3rd WNBA championship this year, she said, “I thought the Seahawks were the only team that’s won a championship in Seattle. You’re lying!”. Another girl corrected me when I said “WNBA”, saying, “Umm Coach Rowan… It’s called the NBA.” These comments were astounding to me. I have loved women’s basketball since I was born – literally, I was at the 2004 WNBA championship at only 10 months old. I have always been so inspired to play basketball by looking up to these female role models who are so talented and strong. I knew that I had to do something to show these girls that I was coaching how inspiring women’s basketball can be. 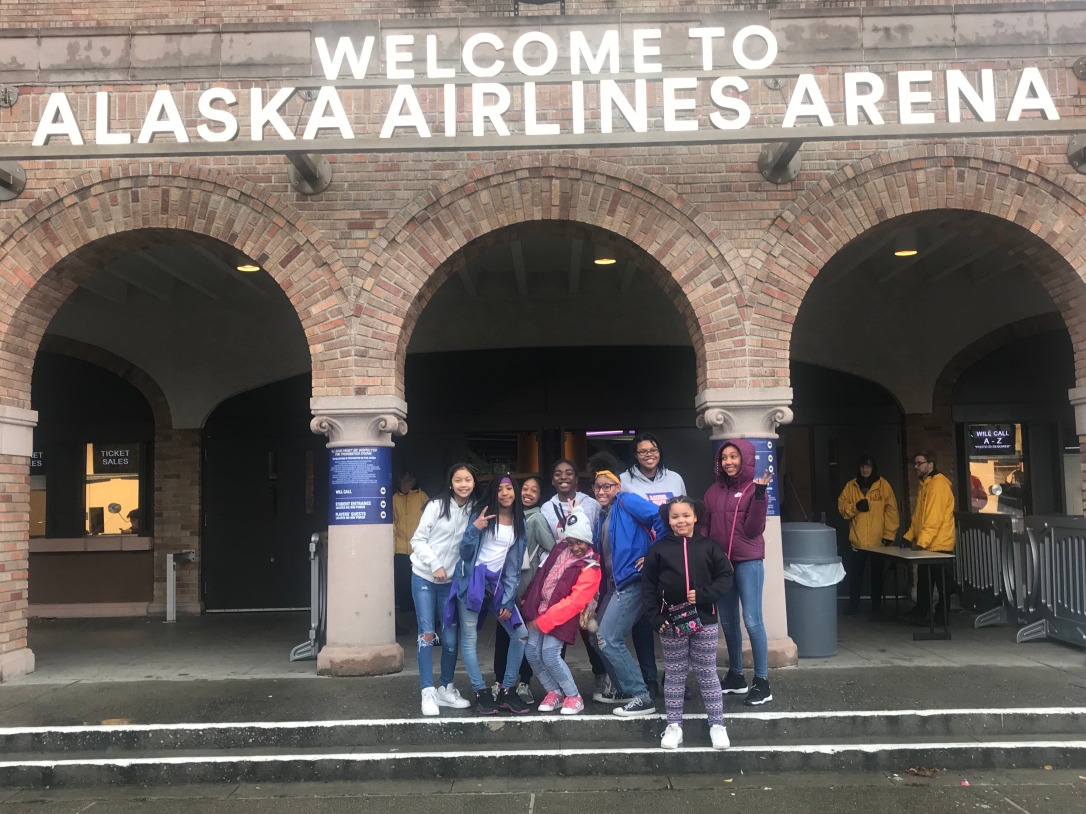 This summer, I was sitting at a Storm game when the list of groups at the game came on the jumbotron. I read the names of all of the AAU teams in the greater Seattle area. Over and over again throughout the Storm season, I saw these teams sitting in the stands, watching the Storm games, talking about what was going on and things that they could try on the court. I realized that I had never really had that experience on my team growing up. I played for Seattle Youth Recreation Foundation, a team out of Rainier Beach Community Center that played AAU teams from around Seattle, but wasn’t as expensive as an AAU team. I played for SYRF for almost 7 years, and I am so grateful for the program and the family-like relationships I created while playing there. But something that I always noticed about SYRF compared to other AAU teams in the area was that our team was constantly changing. Girls would lose interest in basketball and go pursue other sports, while a lot of the other teams we played had all of the same girls from 3rd grade to 8th grade. It took me a while to realize that most of these girls didn’t have anyone to look up to. We never got the opportunities to go to Storm games or UW Women’s Basketball games, so girls that I played with didn’t know any women’s basketball players. It was really sad for me to see only AAU teams on that jumbotron, rather than other local community center teams, where girls who may not have the money to play AAU get their start.

So I decided to create Pick n’ Role Models, which helps girls on lower-income teams to get tickets to higher-level women’s basketball games, so they can find role models to inspire them to play basketball. I think that this is really important because if more girls play basketball in high school and college, the WNBA could expand and women’s basketball would get a lot more coverage.

This summer, at my second year at TABLA (Team Awesome Basketball Leadership Academy), we were asked to come up with a project. This idea for Pick ‘n Role Models had been in the back of my mind, and I was so excited to be able to work on it with the help and feedback of girls at TABLA. I explained my ideas to teammates and they gave me really good advice. I worked on a poster with the outline of my project, which I shared with people on TABLA Community Day and got a lot of awesome feedback. After TABLA, I wasn’t really sure what to do to kickstart my project. I was so happy when Bea told us that someone would be chosen to have their project fundraised for at the Awesome 3-on-3 Jam. I sent in an outline of my project and got picked! After getting the money and seeing what I could do with it, I was very motivated to start my project. I was so thankful for TABLA and Bea for helping me get this project started and for giving me feedback on it. I first reached out to the girls that I coach and their parents, and then, I went online and called a few people to set up group tickets. On December 2nd, I met the girls outside of the UW arena we all went inside to watch the UW vs. George Mason women’s basketball game. I watched the girls smile as the UW players ran out of the tunnel while everyone was cheering. During the game, I heard them talking about plays that they would run that the UW players were running. Two of the girls were even invited to do a shooting competition on the court at halftime, which made them so happy. One of them said to me, “I hope I can play on a court like that when I get older.”

At Team Awesome Basketball Leadership Academy (TABLA), we connect athletic instruction on the court with leadership-building and social justice activities in the classroom. Our curriculum ensures that TABLA athletes develop the skills not only to take their games to the next level and to lead their teams on the court, but to become advocates for gender equality in sports and beyond.

Join us July 16-19 this summer at Shoreline Community College. Reserve your spot as soon as early bird registration tips of March 15, 2019!

Help Us Make A Difference!