“At this point in the season, as we head into the holidays, make sure to enjoy time with family and friends. At the same time, utilize the time off from school to get into the gym and get extra shots up. Every time you put in extra work to improve yourself, you improve the overall ability of your team.” – Charli Elliott, Pacific U.

As we head into the holidays, the staff at the Team Awesome Basketball Leadership Academy checked in with our Junior Counselors and they spared a few minutes during their finals week to offer advice for our young athletes. Read below to see how they are doing in their seasons, and what wisdom they want to impart!

At Pacific University in Oregon, #10 Charli Elliott is working her way back on the court after a knee surgery – and will be active soon. Out in the sunny state of California, #21 Lindsey Cleary has started every game and is helping her Claremont – Mudd – Scripps team to a 6-2 start on the season. One of their only losses comes against the University of Puget Sound, when Coach Sara Thomas was in attendance. On December 17, fellow JC Charli Elliott will fly with her Pacific squad to southern California for a good ol’ showdown between TABLA folks!

“If you’re feeling frustrated, with other people, with your game, with school, whatever it is – focus on what you can control. Have faith, and work hard because that’s all you can do and worrying about what you can’t control will only hold you back.” – Lindsey Cleary, Claremont McKenna

With an average of 14 points and 6 rebounds per game, #23 Makana Stone has been pacing the 7th-ranked Whitman Blues to an 8-1 record. Early in the season, she was named to the Spokane Airport Whit Classic All-Tournament Team; this past weekend, she was voted the Holiday Classic Tournament Most Valuable Player. Her teammate, #10 Mady Burdett, is coming off a concussion injury (sustained when she ran into a wall); as soon as she returned, with TABLA camper Raelee Moore among the 500-fans in attendance, she put on what Whitman Athletics called “the Mady Burdett Showcase”, knocking down three treys in a row and propelling her team to an 80-69 victory over Puget Sound.

“It sounds silly, and I feel like people say it all the time, but I’d tell the campers to enjoy the game and find the fun in the game! As young athletes, I feel as though we sometimes get so caught up in the competitiveness of the sport and the ‘pressure’ to do well that we forget to simply…have fun! Compete, always!! Get upset when you miss a shot or travel or mess up. But, let it go quick and have fun practicing your butt off so you don’t make the same mistakes. Ball is life! And if life isn’t fun, then you’re going about it all wrong!” – Makana Stone, Whitman College

” ‘Your body can withstand anything, it’s your mind that you have to convince.’ It may be hard in the middle of the season, but that’s where the winning teams separate themselves from the losing teams. Those who push hard mentally and physically are the ones who get to call themselves champions.” – Mady Burdett, Whitman College

JC Teanna Blees is settling into her position as the Executive Director at Ladies Elite Athletic Development, coaching at Crossfit in Burien, and is a couple weeks away from finishing her Ph.D. in Industrial Organization Psychology. After five years of insanity (how does she do all of this?), her dissertation on leveraging cognitive strategies to increase mental toughness and performance in athletes is almost finished! Two claps!

“Stay grounded – whether your team is 8-0 or have yet to win a game, it’s important to remember why you are out there on the court. You’re out there first and foremost because you love the game – playing through the lens of passion will keep you humble when things are going well, and keep you hopeful during turbulent times. Don’t forget your why – thats your fire!” – Teanna Blees, Seattle Pacific University

Our guest trainer, Mikayla Pivec, is also rocking in her new point guard role at #19 Oregon State. She started off her sophomore season with a double-double with 15 points and 15 rebounds (and 7 assists to boot). In the Maui Classic, with Coach Bea Chang in the stands, Mikayla was named to the All-Tournament team after her 20-point performance against Utah State. See some videos on BEA’s instagram account (@_liveawesome). Mikayla’s games will be broadcast on television or catch her at the Pac-12 tournament in Seattle in March! 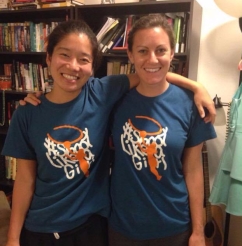 Looking for an *awesome* Christmas gift for friends, family, or just for yourself? After a few requests, we are relaunching the #shootlikeagirl campaign with a 10% discount for the holidays and continue to support our vision of a world in which girls, too, can grow up in a world with images like themselves playing sports. Check out the original campaign by Basketball Education in Action for more. Order by Dec 14 for delivery by Christmas: www.teespring.com/shootlikeagirl. 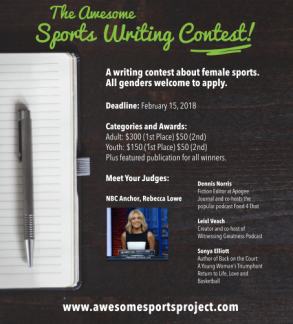 The 2nd Annual Awesome Sports Writing Contest has officially been announced!! Youth and adults – write your story about girls’ or women’s sports, win a cash prize, and get published on the Awesome Sports Project!!! This year’s contest features a celebrity judge in NBC Sports Anchor Rebecca Lowe!!! Deadline for submission is February 15, 2018. Find out more at www.awesomesportsproject.com.

For the latest Basketball Education in Action news, join our Facebook Group and follow us on Twitter and Instagram. Best of luck this season, and stay tuned for more information soon about Team Awesome Basketball Leadership Academy in the summer of 2018.